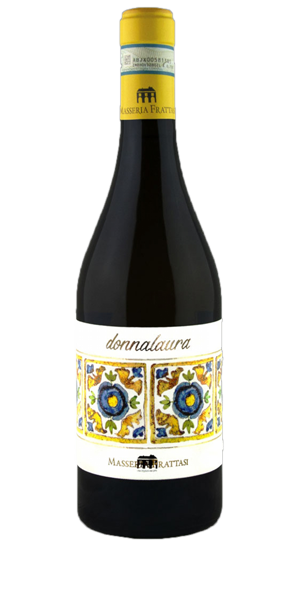 Along with the red grape Aglianico, Falanghina is believed to be Campania’s oldest variety, reportedly of Greek origin and loved by the Romans. Falanghina is indeed thought by some to have been used to make the brownish wine Falernum, antiquity’s greatest and most appreciated wine. It is primarily cultivated in the Campania region of Southern Italy. Its name is thought to derive from the Latin word “falangae” (phalanx) which means stake or pole. The Romans probably referred to the Greek method of growing this grape by training the vines to poles.

The Falanghina Beneventana is thought to have originated in Bonea, a village on the foothill of the Monte Taburno (not far from the town of Benevento) that borders with the village of Montesarchio, home of Masseria Frattasi. They still grow in their vineyards two local biotypes of Falanghina – Falanghina di Bonea and Falanghina di Montesarchio – which survived the Phylloxera epidemic that in the late 19th century destroyed most of the vineyards for wine grapes in Europe. Falanghina grapes find their optimal environment on the slopes on the Mount Taburno and perform very well on volcanic soils.

This beautiful wine is a “Falanghina di Montagna” (Falanghina of the mountain) like Pasquale Clemente, the man behind Masseria Frattasi, loves to describe his top white wine. Donna Laura, which is called after Pasquale’s grandmother, comes from the oldest vineyards, at the highest altitudes on the Mount Taburno.

Donna Laura is a complex wine made from two different biotypes of Falanghina from plants aged between 45 and 120 years old, implanted on volcanic soils mixed with clay and limestone deposits, at a height of approximately 500 meters above sea level. The harvest is manual and is carried out once overripe on the plant is reached between the second and third decade of November so as to allow the “late harvest” denomination.The short maturation in oak for around six months does not overwhelm the identity and character of the wine.

The label reproduces the majolicas designed in the eighteenth century by the master ceramist Giustiniani and recovered following the collapse of the family chapel during the earthquake in 1980.

Donna Laura surprises with the complexity, intensity and beauty of a wine dressed in golden yellow. It is full-bodied with a great deal of richness from the late harvested grapes plus vanilla notes from the oak maturation. The nose releases hints of peach blossoms alternated to white fruits such as pear and apricot, then hazelnut and honey. Initially sweet on the palate which is dominated by acidity and minerality. Long, lingering finish of pineapple, grapefruit & mango. Slight hint of spiciness too.

A versatile wine, to pair with fish based dishes or with tasty white meats. It pairs well with Asian cuisine such as Thai.